Over 140 years of living out our mission on this corner.

An Abbreviated Summary of 140 Years

First Pres was founded the day before the incorporation of the city of Berkeley, on March 31, 1878, by 27 individuals
wishing to minister to the budding university community. As the town and gown of Berkeley grew, so did the church. In 1902, the congregation purchased the current lot, at the corner of Dana and Channing, and built a sanctuary to seat 1,200 when church membership at the time was about 500.

The vision of the members did not go unrewarded; over the next 40 years, the church expanded its ministries at home and abroad. Missions has always been an emphasis at First Pres. During the 1950s, the church sent out dozens of members into full-time Christian service, accounting for 10% of Presbyterian missionaries from the United States. 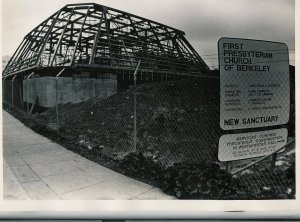 In the 1960s, attendance dwindled when the church found itself in the midst of a cultural and literal battleground. When the sanctuary was declared unsafe by the fire department in 1971, First Pres made a conscious decision not to leave the contentious streets where rioters were breaking windows, but to live out its mission on this very corner of Dana and Channing. A new sanctuary was built, lined with glass windows in order to be open and visible to the community. The church was able to maintain a vital witness to the gospel at a time of great social and political change.

Over the years, additional First Pres ministries grew on our corner of Dana and Channing. Berkeley Christian Counselors (formerly the Christian Lay Counseling Service) began as a ministry of the church in 1978. Our licensed childcare facility, Cornerstone Children’s Center, was founded in 1991, which brought the use of the playground adjacent to the building now known as McKinley Hall.

The Vision 2000 Committee and later the Facilities Task Force began a long process of addressing building issues, our needs, and engaging with the City of Berkeley. This process brought us the Geneva Hall building with an underground parking structure and the 180-degree rotated McKinley Hall, which were dedicated on September 25, 2005.

First Pres’ view of justice alongside scripture resulted in a view of ourselves as part of the minority world, and the Global Church Conference debuted in 2006, to bring prominent and strong voices from the now majority world to change our understanding of mission work and evangelism. In 2013, we began our mission efforts on justice, poverty, oppression, and women: JPOW, to learn about how God might be calling us to act as people of faith. 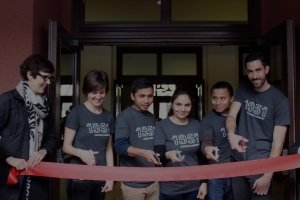 In 2017, First Pres mission partner 1951 Coffee Company opened their first coffee shop (as our tenant in leased space), further opening our church campus to the community—especially University students. 1951 Coffee is a non-profit organization providing job training and employment to refugees and asylees while educating the surrounding community about refugee life and issues.

The last time the First Pres leadership engaged in a process of discerning the vision for the life of our church resulted in our vision statement adopted in 2005. It reflects our passion and commitment to respond to God’s love through ministry, first in our specific context in the city of Berkeley, and then to the far reaches of the world.

As we look back over 140 years, we see Christ-centered qualities of the character of First Pres Berkeley that began as a ministry for university students and how our mission has extended outward to the wider community and the world. May God continue to be faithful to us as we continue to grow in Christ toward a celebration of our 150th anniversary and beyond.