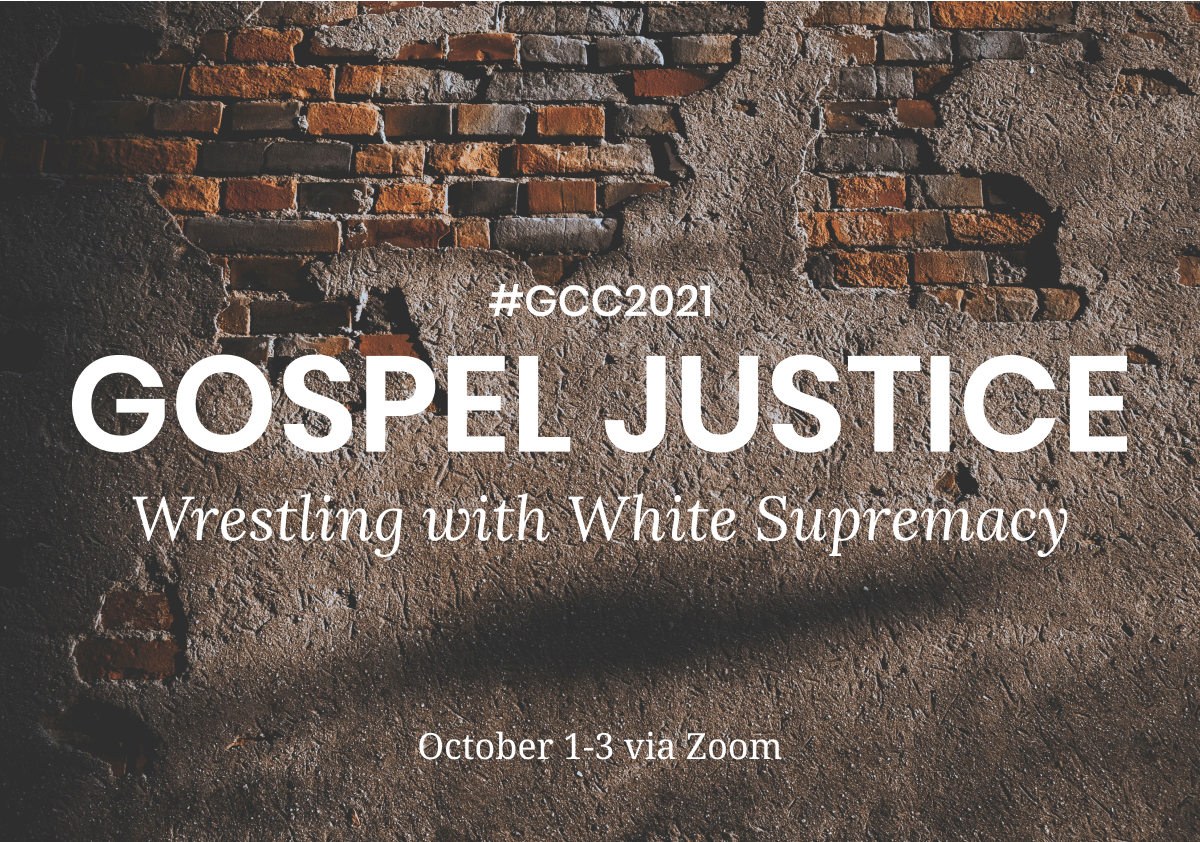 #GCC2021 has ended, view our conversations together here!

As Christians who desire to follow God’s heart in seeking gospel justice and freedom for all, we seek to understand, acknowledge, wrestle with and respond to white supremacy.

The hope of the Gospel is the hope for everyone. There is equality and freedom waiting for all of us—God sees each one of us as beloved and worthy. White supremacy saps that hope and subverts justice and mercy, both of which are at the heart of God. Acknowledging the existence of white supremacy brings us grief, prompts us to repent, and leads us to seek racial justice and repair. God’s call upon the church is all of this and more!

For our purposes, we are not alluding to the overt racism of white supremacist hate groups. We refer instead to the economic, cultural, and political systems in which whites overwhelmingly control power and material resources. Embedded in these systems are conscious and unconscious ideas of white entitlement and privilege—systems in which whites receive the benefit of the doubt and built-in advantage. 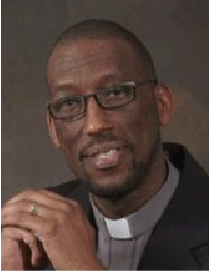 Pastor of Sojourner Truth Presbyterian Church in Richmond, CA, the Reverend Kamal Hassan firmly believes that “The church must be engaged in efforts to mend the tear in our social fabric that has caused so many of us to focus solely on our individual needs and ignore the sufferings of others. To be true to our prophetic calling the people of God must act locally for justice, peace, and freedom, while also considering the global implications of our work. We must take seriously the urgent need to participate in the building of a new heaven and a new Earth because in a faithful and relevant church there is hope for the entire world.”

Although Sojourner Truth is his first call as a Presbyterian pastor, Rev. Hassan has more than 20 years of experience as a religious worker and more than 10 years as an ordained minister in the African Methodist Episcopal Church. He is a powerfully gifted preacher and Christian educator whose message is rooted in the African American prophetic tradition. He is a community organizer who has toiled for decades in low-wealth communities of color for social justice. He is a sensitive and supportive counselor and visitor of those in need. He is a visionary leader who can see beyond the now to the “not yet.”

Rev Hassan holds an AA degree in Radio Broadcasting from Los Angeles City College, a BA in History from Cal State University Los Angeles and a Master of Divinity degree from the San Francisco Theological Seminary. 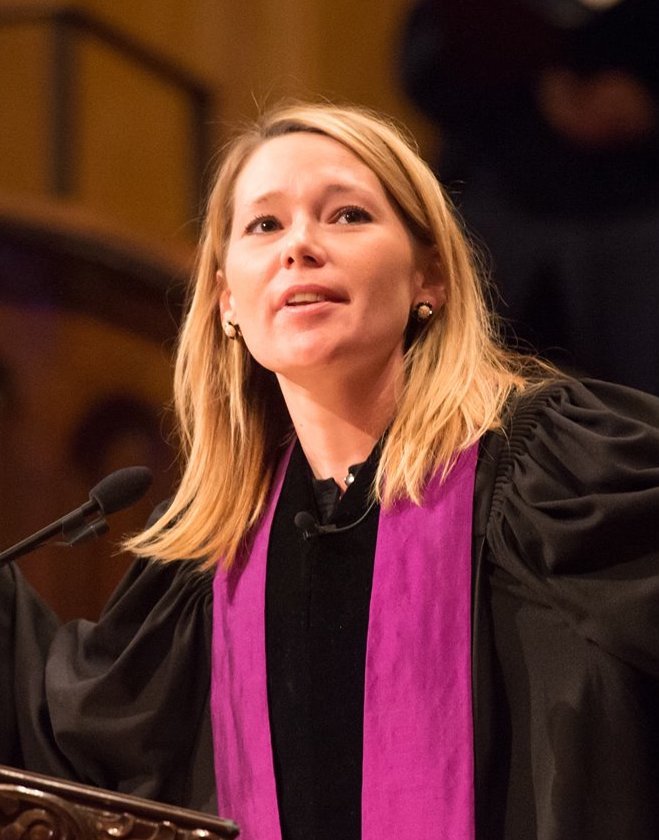 Rev. Sarah Brouwer (she/her) is the Lead Minister at St. Paul’s United Church of Christ in Saint Paul, MN. Ordained a PC(USA) minister in 2010, after attending Luther Seminary, she is deeply ecumenical and believes we are one Church, and one Body of Christ in the world. At St. Paul’s, the mission statement is “Journeying together toward deeper faith, love, and justice for all,” and it’s a congregation that lives out what it says. With deeply progressive values rooted in the Gospel, they are engaged in significant conversations around creation justice, extravagant welcome of lgbtqia folx, and systemic racism.

Previous to St. Paul’s, Sarah was the Associate Pastor for Congregational Life at Westminster Presbyterian Church in Minneapolis. Sarah has also served as Associate Pastor for Member Care at Ladue Chapel Presbyterian Church in St. Louis, MO, and as a Lake Fellow in Parish Ministry at Second Presbyterian Church in Indianapolis, IN (a validated ministry through the Lilly Endowment). A graduate of Luther Seminary in Saint Paul, Sarah is the recipient of the A.E. Hanson Prize in Preaching. During Sarah’s five-and-a-half years at Westminster, she led the communications team, leadership development, women’s ministries, young adult ministries, developed a new worshiping community with an emphasis on the arts, and served on the team that started a spinoff of the popular Westminster Town Hall Forum, called TownTalks.

Sarah lives less than a mile from George Floyd Square, and previously lived close to Ferguson when Michael Brown was killed by police in 2014. She believes proximity has opened her eyes to issues of racial justice, which has changed her and her ministry profoundly. While not a scholar or expert of any kind, Sarah tries, with humility, to bear witness to systemic racism and the issues that surround it, in her city and beyond – hopefully leading others to learn and do the same.

While Sarah would like to have more hobbies, it’s hard to have them with an eight and four year old, a spouse, a full time job, and the ever-changing landscape of COVID. She does occasionally fit in a jog, and loves a good thrift store.

Carolyn Chen is associate professor of ethnic studies and co-director of the Berkeley Center for the Study of Religion at UC Berkeley. Her research focuses on religion, work, immigration, race, and ethnicity in the United States. She is the author of Getting Saved in America: Taiwanese Immigration and Religious Experience (Princeton 2008) and co-editor of Sustaining Faith Traditions: Race, Ethnicity, and Religion among the Latino and Asian American Second Generation (NYU 2012). Her new book, Work Pray Code: When Work Becomes Religion in Silicon Valley (Princeton 2022) is coming out in March.

Jeanelle Austin is the creator of Racial Agency Initiative, a racial justice leadership coaching company that pursues racial justice with joy. Jeanelle has over fifteen years of experience in facilitating group conversations on race, designing racism and multicultural educational programs, mentoring individuals, and helping institutional leadership think through strategies to take seriously diversity and inclusion integration. She has more than 20 years of public speaking experience and consults and speaks nation-wide on various topics as they intersect with race in America. A native resident of Minneapolis, she volunteers as a caretaker and board member for the George Floyd Global Memorial.

Jonathan Wilson-Hartgrove is a celebrated spiritual author and sought-after speaker. A native of North Carolina, he is a graduate of Eastern University and Duke Divinity School.

In 2003, Jonathan and his wife Leah founded the Rutba House, a house of hospitality where the formerly homeless and the formerly housed share life together. Jonathan directs the School for Conversion, a popular education center that works to build beloved community and resource moral fusion coalitions. He is also an Associate Minister at St. Johns Missionary Baptist Church.

Jonathan is a leader in the Red Letter Christians movement and the Poor People’s Campaign: A National Call for Moral Revival. He speaks often to churches, conferences and university audiences. He is the author, most recently, of Reconstructing the Gospel and Revolution of Values.

Professor of Asian American Studies at San Francisco State University, Dr. Russell Jeung is author of books and articles on race and religion. He’s written Family Sacrifices: The Worldviews and Ethics of Chinese Americans (Oxford U Press, 2019); Mountain Movers: Student Activism and the Emergence of Asian American Studies (UCLA AAS Center, 2019); and At Home in Exile: Finding Jesus Among My Ancestors and Refugee Neighbors (Zondervan, 2016).

In March 2020, Dr. Jeung co-founded Stop AAPI Hate with Chinese for Affirmative Action and the Asian Pacific Policy and Planning Council. It tracks incidents of COVID-19 discrimination to develop policy interventions and long-term solutions to racism.

The Rev. Dr. Charlene Han Powell currently serves as the Senior Pastor of First Presbyterian Church of Berkeley. After graduating from University of California San Diego with a degree in Religious Studies and a minor in dance, Charlene headed east to attend Princeton Theological Seminary. During her time there, she not only felt called to serve as a pastor in the Presbyterian church, she also discovered that her great-grandfather was one of the first ordained Presbyterian ministers in Korea. From there, Charlene went on to serve as the Associate Pastor of Education & Engagement and then the Executive Pastor at Fifth Avenue Presbyterian Church in midtown Manhattan.

Building on her passion to help people explore and articulate their faith in a diverse, multicultural, multi-faith world, Charlene received a Doctor of Ministry from New York Theological Seminary. Her dissertation focused on the intersection of faith and culture for millennials and offered a pedagogical process by which members of this generation could explore their own beliefs and questions with the goal of writing their own confession of faith. Charlene has preached and lectured in churches and seminaries across the country. She is the co-host of This Is Crucial, an interactive podcast focused on healing justice and racial equity.